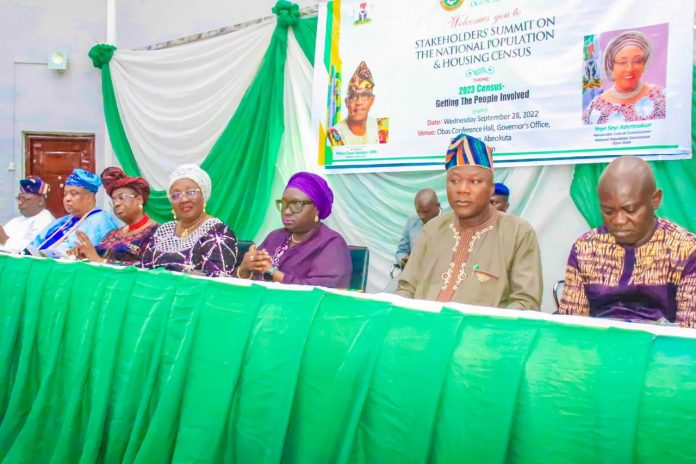 Nigerians have been told to desist from regarding population and housing census a mere political strategy without national benefits..

The Ogun State Gpovernor, Prince Dapo Abiodun stated this this midweek at a stakeholders’ summit on the 2023 population and housing census with the theme “2023 census: getting people involved” organised by the National Population Commission (NPC).

The governor who was represented by his deputy, Engineer Noimot Salako-Oyedele, said census is a statistical exercise that provides veritable tools for effective planning and sustainable national development.

While pointing out that census remains a national event which is a responsibility of all, the governor reminded critical stakeholders that the data gathered from next year’s census is capable of assisting the government in proffering solution to the country’s security challenges.

According to governor Abiodun,the irregular conduct of census in Nigeria,with the last exercise conducted in 2006, has denied the nation of huge benefits of comprehensive baseline data for evidence-based decision making.

He urged the people of the state to embrace the enumeration exercise as government needs adequate and proper data for the provisions of basic amenities and enhanced wellbeing.

In a presentation on the imperatives for the conduct of the 2023 population and housing census, a former Director General,National  Population Commission, Dr Bola Akinsanya said the continuous usage of the 2006 census data for development purposes by the federal government is out of place,adding that the conduct of next year’s population and housing census is indeed imperative .

In a goodwill message, the Speaker of the House of Assembly, The Right honourable Olakunle Oluomo,represented by the deputy speaker, lawmaker Akeem Balogun saw the need for people to support the exercise by giving reliable and accurate data during the exercise .

Also speaking,the Akarigbo and paramount ruler of Remoland, Oba Babatunde Ajayi who described population and housing census as a critical and useful means of guaranteeing effective national planning, assured the NPC of the support of traditional rulers in sensitising the people on participation.

In a welcome address, the state NPC federal commissioner, Yeye Seyi Aderinokun said the summit was to among other objectives, sensitise the stakeholders on the importance of making the first digital census in the country,a successful outing.

Yeye Aderinokun gave kudos.to the governor Dapo Abiodun-led administration for throwing its weight behind the activities of the National Population Commission in the state through the provision of logistics for easy accessibility of the enumeration areas .#