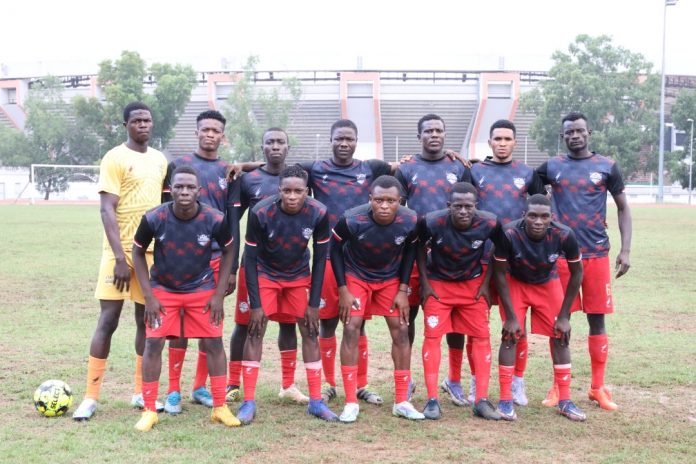 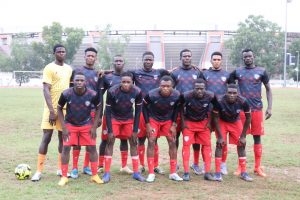 Mahanaim FC displayed class and dominance over AS Roma Academy 4-1, on their home turf at the weekend in Abuja.

The first 45 minutes of the Match produced all five goals, with Mahanaim’s striker Aliu Baba the star man, scoring a brace within the opening 17 minutes and providing an assist.

Aliu scored the first goal on 12th minute, when he connected to a pass from Joel Yakubu. That did provoked an equaliser from Roma on 14th minute. However, three minutes later, Aliu completed his brace, after combining again with Joel Yakubu.

The 4-1 route was completed when Yahaya Danjuma was teed up by Aliu Baba, as Mahanaim maintained the tempo.

Coach Jackson Jackson changed almost the entire starting eleven in the second half but the introduced players couldn’t quite produce the clinical finish witnessed in the first. Roma Academy made frantic efforts to score their own goals but all that proved abortive as the game finished in a 4-1 away victory for Mahanaim FC.

Coach Jackson Jackson of Mahanaim FC underlined what happened in the game:

“We wanted to score more goals but the boys who came on the second half could not replicate the tempo which is something we have to work on. But I’m very satisfied with the result,” Jackson says.

“I scored to goals but I’m not satisfied. I wanted to score more goals, that’s is my job. I’m sure if I stayed on in the second half I could have scored more goals but maybe that’ would be next time,” he says.

Mahanaim FC had many returnees who featured in the match. Yahaya Danjuma who made the WAFU B Zone U17 best team played his first match. Same as Ridwan Sarki who was with Nigeria U20 team that won WAFU B Zone Championship.

Striker Paul Ogunkoya also returned to the team after a successful loan spell at Ikorodu United when theh played in the second division league.