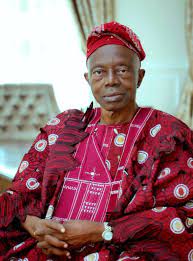 Governor abiodun made this known this Tuesday at a year remembrance of his father held at James Anglican Church, Iperu-Remo in ikenne local government

Appreciating the goodness God has done to his family ,governor abiodun promised to build a church to be named Emmanuel anglican church in memory of his father and complete an existing hall at the church premises to be named after his mother Mrs Victoria abiodun

Admonishing Nigerians to be hopeful, the first citizen of the gateway state expressed optimism that the current challenges facing the nation would soon fade out through prayer

In his sermon, the arch-bishop of Remo Diocese, reverend olusina fape called on the people to be of good behaviour when alive stressing that everyone would be remembered according to one’s deed

Reading from 1st corinthians chapter 9 verse 2 ,tbe cleric said late Dr Emmanuel abiodun is being remembered for being generous and good to people during his lifetime