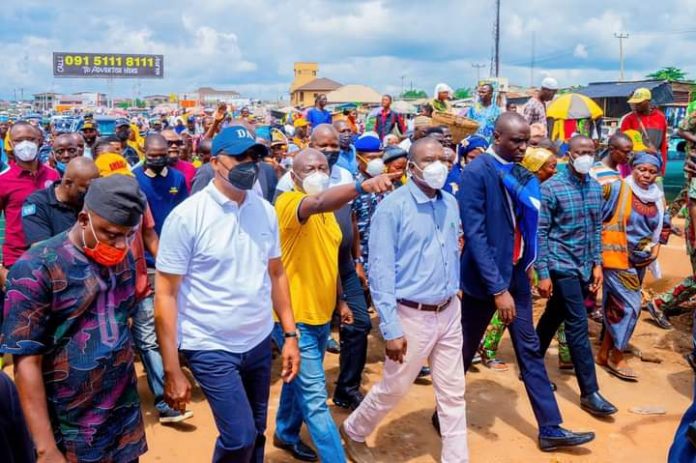 …assures priority will be given to people’s welfare

Ogun State governor, Dapo Abiodun, on Saturday, embarked on the inspection of two major road projects being carried out by his administration within the Abeokuta metropolis.

He also took time to inspect the reconstruction of the linkroad between Ilishan in Ikenne Local Government and the University town of Ago Iwoye in Ijebu North Local Government.

The governor, accompanied by his cabinet members and top government functionaries paid inspection visit to the 5.3 kilometer Lafenwa-Rounda and the 5.7 kilometre Kemta-Somorin roads, to ascertain the level of work.

Addressing the residents and market women at Lafenwa, Abiodun reiterated the decision of his administration to deal ruthlessly with anyone caught disturbing the peace being enjoyed by the people of the state.

He condemned disturbances in the market by miscreants, vowing that he would deal with anyone caught disturbing the peace in the area.

While promising to complement the work of the police in the axis with men of the South West Security Network, code named ‘Amotekun’ and the OPMESA, the governor urged parents and guardians to warn their children and wards who are involved in the disturbances in the market to desist from such act or face the full wrath of the law.

“However, I am going to complement his efforts with the operatives of the Amotekun Corps and the OPMESA, and I am hereby warning that any parent of any miscreant should take note.

“If I catch any miscreant that is disturbing the peace of traders, business men and women in this market, I will prosecute them to the fullest extent of the law”, Abiodun stated.

He assured the residents of the area that upon completion of the drainage along the road, the issue of flooding would be a thing of the past as the drainages were constructed in a way that the volume of water from the rain would easily be accommodated.

Abiodun also assured the people that his administration would in the next two months work towards restoring power to the popular Lafenwa market.

“The market men and women have brought it to my attention that their expectation is to ensure that this drain is wide enough to carry the body of water all the way to the Ogun River, and I have assured them that the drain will be 1m by 1m, just like the one at the adjacent side of the road and it will be wide enough to carry the volume of water to Ogun River and this place will cease to flood.

“It has also been brought to my attention that there is no power in Lafenwa Market and I have made a promise to the traders that in the next 60 days, there will be power in Lafenwa market,” the governor added.

In their respective responses on behalf of the traders, Alhaja Rashidat Oyedele and Alhaji Akeem Alalade, commended the governor for embarking on the Lafenwa-Rounda road which was abandoned by the immediate past administration, pledging the traders’ support for the governor second term aspiration.

Speaking with newsmen after inspecting Kemta-Somorin Bye Pass road, Abiodun said his administration would continue to prioritize the welfare of the residents of the state.

He explained that the road is an important by-pass road that would help to decongest the ever-busy Obantoko Road.

Abiodun who also commended the residents of the area for supporting the contractors, promised that the road would soon be completed

Earlier, the Baale of Itoko-Ilugun Community, Chief Gbeje Orobiyi, appreciated the governor for the reconstruction of the road which he said had been in a deplorable condition for years.

He, however, stated that since the construction of the road began, the economy of the area has improved tremendously.