The Ogun State governor Prince Dapo Abiodun has been honoured as the 2021 Best Governor of the year by the Vanguard newspaper.

Speaking with newsmen after receiving the award tagged a decade of excellence,held on Friday in lagos, Governor Abiodun who dedicated the award to member of his cabinet and the entire people of the state said the award was made possible as a result of team work, cooperation and collaborative efforts of every member of the state executive council, including the Judiciary, media and the ruling party, All Progressives Congress, APC, led by President Muhammad buhari

The governor explained that the award would serve as another call to service, assuring that the current administration would not renege on its promise of making the state more viable and conducive for the people of the state.

Mr governor who was highly elated, urged the people of the state to support his re-election bid in order to continue the good work he has started

The event was attended by dignitaries across the country including the Deputy Governor Engineer Noimot Salako-Oyedele, members of the state executive council among others. 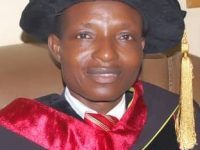