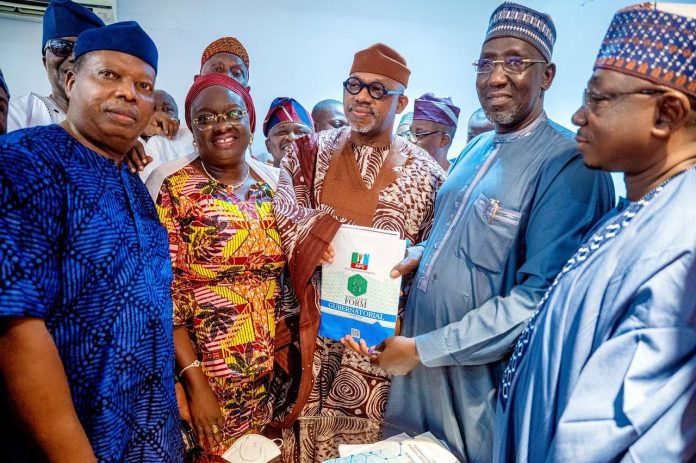 The Ogun State governor, Dapo Abiodun, on Wednesday, submitted the Expression of Interest and Nomination Forms for his re-election on the platform of the All Progressives Congress to the party leadership in Abuja.

Abiodun arrived at the venue around 3: 15p.m amid pomp and pageantry, waving flags and singing songs in praise of the governor who is seeking a second term in office.

According to a statement by his Chief Press Secretary, Kunle Somorin, the governor, who submitted the forms to party officials at the International Conference Centre, Abuja, was accompanied by a large crowd, which included party stalwarts, elder statesmen and women, national assembly members, cabinet members, political associates, and supporters, among others.

Abiodun, after submitting the nomination form, said that with the support from the masses, he was confident of victory during the March 11, 2023, governorship elections.

He added that his administration is committed to the delivery of real dividends of democracy in all aspects of life to all citizens of the Gateway State.

Somorin quoted Abiodun as saying that he is committed to providing qualitative governance to all residents of Ogun state.

According to the statement, the governor said: “Today, I formally submitted my nomination and expression of interest forms to our party leadership.

“For the avoidance of doubt, I am running for a second term in office, and I have announced that I will be running with my deputy, Engr. (Mrs) Noimot Salako Oyedele.

“We are running on the records of our achievements in the last three years. We have been open, transparent, inclusive, accountable and brought dividends of democracy to every nook and cranny of Ogun State.

“We have put in place, a robust economic agenda, that is encapsulated in our ISEYA (Infrastructure, Social Welfare and Welfare and Wellbeing; Education, Youth Empowerment and Agriculture) developmental agenda and it has propelled all the various interventions that we’ve had in Ogun State.

“Despite COVID-19 and its constraints, we achieved landmark achievements across all sections for which we have received recognition globally. It gave us the opportunity to redouble our efforts and ensure that people can feel us meaningfully in all areas. We shall not rest on our oars. The future of the next generation is the foundation we are laying. All good hands must be on deck”.

The governor appreciated the people for their understanding and loyalty, declaring “We will not take your support for granted. The next level is to consolidate in the gains so far made on infrastructural development, digital economy, on good roads, affordable housing, health care delivery, free, functional education, welfare services, employment and agriculture.

“We will not develop one section of Ogun State at the expense of another. We will raise the bar of good governance, economic renaissance and individual prosperity of our people. So shall it, going forward”.

The team later paid a courtesy a courtesy call on the members of the National Working Committee comprising of the Deputy National Chairman (North), Sen. Abubakar Kyari, his South counterpart, Chief Emma Eneukwu, the vice chairman, (South West), Isaac Kekemike and the National Secretary of the party, Senator Iyiola Omisore.

The Governor congratulated members of the NWC and informed them that he has added value to governance and making the state “perhaps the safest in the country”.

“We are an incubation centre for high level labour in the country and we are growing that as the education capital of the country. We remain the investment capital of Nigeria. We are building the first truly agro-cargo airport at Ilishan…Indeed what we are building his an Aerotropolis.”

Speaking on behalf of the NWC National Secretary, Sen. Omisore applauded the good work of the governor and assure the team of a level-playing ground, the statement concluded