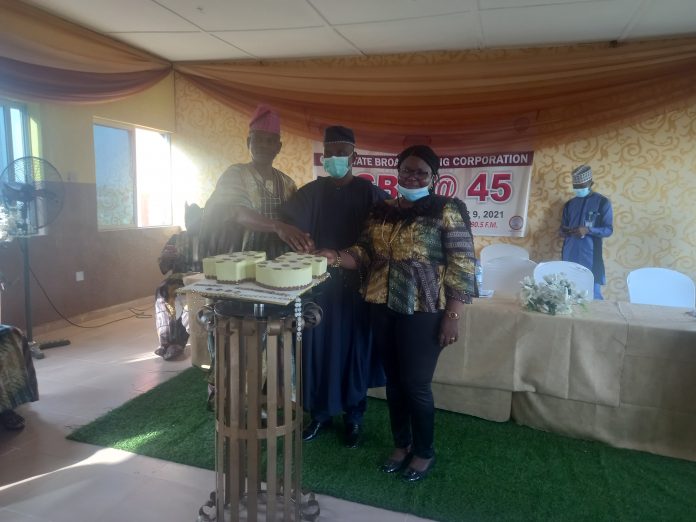 As part of the 45th anniverssary of the nation’s model station,the Ogun State Broadcasting Corporation,the Board and Management of the corporation on Thursday presented long service Awards to members of staff who have worked for more than twenty years.

He said “This station is built on solid rock in terms of content, quality, competence of management and highly dedicated workers”

“Irrespective of your challenge,you have never allowed that to affect your productivity”

“On behalf of the Ogun State government, i want to assure you that in line with the “Ise Ya” mantra ,we will continue to work with you”.

Alhaji Odusile assured the corporation that the State Governor, Prince Dapo Abiodun is fully aware of the challenges facing the corporation and it will be accorded the right attention soon.

The Head of Service, Dr. Nafiu Aigoro in a remark promised to work with the Management assuring that the challenges facing the corporation are surmoutable.

He promised that efforts will be made to ensure that OGBC is repositioned.

He said “But for today, it is to identify with you, rejoice with you and to charge you that we need ” to reinvent the past”.

“There is virtually no radio station that you will not see those who have passed through the station, and as such i want to enjoin those of you on ground to continue giving your best”.

Earlier, the Chairman, Board of Directors of OGBC,Alhaji Yahaya Olodeoku commended the dedication of members of staff, saying “with little or no supervision, they know what to do at any point in time”.

He said “As board members, we have a vow that we want to leave this station better than we met it”.

The General Manager of the Corporation, Mrs. Toyin Sogbesan while welcoming guests to the event went down the memory lane on the establishment of the corporation which was on 9th Decenber, 1976.

She said the station is still waxing stronger and still sustaining the high level of professionalism despite the challenges due to the ingenuity of members of staff.

Mrs. Sogbesan further observed that the award being given to no less than forty-two members of staff is to celebrate excellence, , dedication and commitment to the cause of the corporation.

Mrs. Sogbesan said the current set of managenent has ensured prompt payment of salary, refurbshment of conference hall, refurbishmeent of the live studio and the newsroom, all of which are achieved true prudence management of the meagre resources.

She added that the management has also ensured the prompt payment of pension deductions, adding that some members of the core operation staff were also sent on training, while those of the admininistration and other division would be sent on training by first quarter of next year.

A former General Manager,of the Corporation, Mr. Alex Taiwo in a remark said Ogun Radio was founded on unwritten principles which are still in existence.

He said for instance, it was founded on people and that there was no discrimination or abuse.

He added that it was also founded on professionalism, meritocracy and the spirit of Camaraderie.

“That is why OGBC 45 years running, it is still waxing stronger”,he said.

According ro him, for the first twenty- years,Ogun Radio became the identity of the state.

He requested for a minute silence for the late staff who worked so hard and tirelessly to lay the foundation for what is seen today.

” I really appreciate every members of staff, management and everyone here for keeping the flag flying”

Mr. Alex Taiwo while admonishing the staff not to diminish themselves said his career journey in OGBC gave him the confidence to move ahead outside Nigeria,saying when the Foundation is very right ,there is no height one cannot attain in life.

Another former General Manager of the Corporation, Engineer Awotunde Awolana while reechoing the fact that OGBC is a training ground said the histoty of any radio station cannot be written without OGBC been mentioned.

“This is a training ground. That is why the foundation of any other Radio station in Nigeria is based on OGBC”

Engineer Awolana gave a charge to the entire staff members, saying,”better make a leader of your General Manager to move OGBC forward and to the General Manager, he said to her” endeavour to listen to them”

Also Speaking,a former Staff of the Corporation, Mr. Biodun Bello said ” i Iearnt something from here. If you are learning from here, you can work anywhere in the world”.

Highpoint of the occasion was the cutting of the 45th anniverssary cake and the group photographs by dignitaries.

TRACE ,Commandant , Commander Seni Ogunyemi who was represented and other members of Board and Management of OGBC were also in attendance.