Nigerian striker, Chukwudi Goodluck Igbokwe was the star man for Gent under 21 side as they defeated visiting Club Brugge 2-1 on Monday.

The Right2Win Academy graduate who recently joined the Belgian outfits made his debut against Anderlecht. 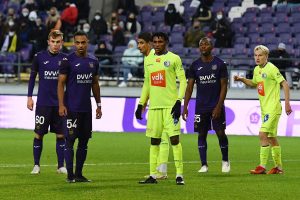 He was again called to action on Monday, November 29, 2021 and he shone like a million star with a top notch performance and two beautiful goals.

Gent were trailing 1-0 with fifteen minutes left to play, Chukwudi Igbokwe was introduced in the 75th minute, and barely a minute later, he got an equaliser, blasting past the Club Brugge goalkeeper.

With clock ticking, the Nigerian youngster gave the present spectators and his team all maximum points with a 90th minute winner.

His goals ensured that Gent Under 21 stay fourth with 17 points, four points adrift of league leaders Genk Under 21. 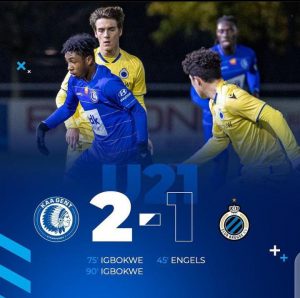 Up next for Chukwudi Igbokwe and his Gent teammates is a game against Royal Antwerp on Monday, December 6, 2021