The Governor said asphalt laying of the road would be completed within two weeks time adfing that the Construction of 7 kilometres Gbonagun bye pass in Obatanko area had been completed and
would soon be commissioned.

The number one man in the gateway state while describing his administration as a promise keeping government explained that he has made a convenant with God that during his tenure ,the state woudd experience unprecedented turnaround for the advancement of the state and the prosperity of the people 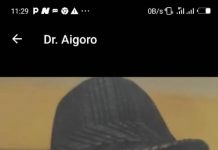