The report of a Special Investigation Panel (SIP) set up to probe the former Head, Intelligence Response Team, Deputy Police Commissioner Abba Kyari has been submitted to the Inspector-General of Police, Mr. Usman Baba.

The four-man panel, headed by the Deputy Inspector -General of Police in charge of the Force Criminal Investigations Department, Joseph Egbunike, was set up two weeks ago to probe Mr. Kyari for his alleged involvement in a $1.1 million Internet fraud linked to an alleged internet fraudster and Instagram influencer, Abbas Ramon, also known as Hushpuppi and four others. 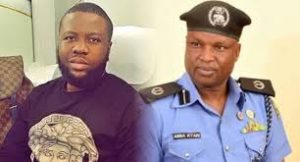 Reports say investigations into Hushpuppi activities, by the FBI, revealed that Mr. Kyari allegedly detained Chibuzor on the orders of Hushpuppi for one month to enable the Hushpuppi and his co-conspirators to fleece their Qatari victim of over $1m.

In view of this, the IG on August 1, recommended the suspension of the Kyari to the Police Service Commission, with effect from July 31.

The IG thereafter, set up the SIP to investigate the allegations against the suspended DCP.