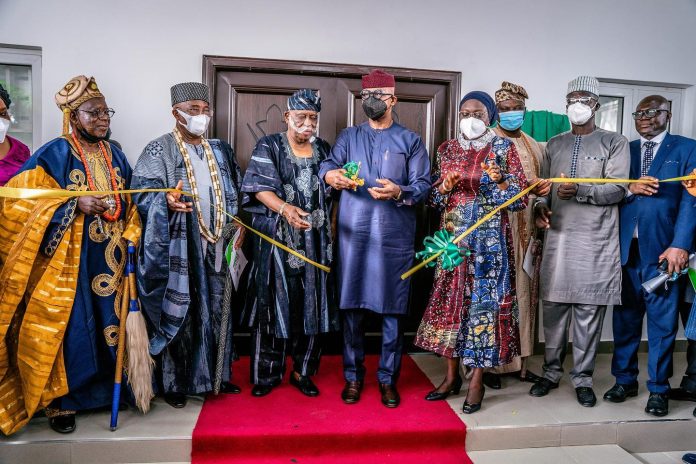 The Ogun State Government on Tuesday played host to many Veteran journalists as the Olusegun Osoba Press Centre cited within the Governor’s office, Oke-mosan,Abeokuta was commissioned.

The event which left foremost journalists of yesteryears reminiscing on their experiences at their various bits, particularly during the times of Chief Olusegun Osoba in the Pen Profession, had Governor Dapo Abiodun attracting accolades from various speakers for honouring Aremo Osoba when he is still alive.

Recounting his experience in the early years of practice, a former Media aide to former President Goodluck Jonathan, Dr Reuben Abati showered encomium on the Veteran Journalist and former Governor for his contributions to the development of journalism practice, saying he had distinguished himself in the profession and politics.

Also speaking, a former Commissioner for Information in the state, Mr Niran Malaolu said the Governor’s gesture was not just an honour to one of the founding fathers of the Nigerian journalism, but to all newsmen.

In the same vein, the Towulade of Akinale, Oba Olufemi Ogunleye after recounting his personal experience while working with Chief Osoba at the Daily Times newspaper advised practising and future journalists to work harder and be objective in their reportage, towards making landmark achievements in this generation, just as the likes of Reporter Osoba left good legacy for them.

Similarly, the Olota of Otta, Oba AbdulkabirAdeyemi Obalanlege who is a Professor of Journalism spoke fondly of his times as one of the state Governor’s office correspondents, during the administration of the Veteran Journalist as the Governor said the memory will continue to linger, as journalists never had it so good, in terms of respect and honour bequeathed on them.

Meanwhile ,the Ogun State Governor, Prince Dapo Abiodun has assured that the current administration will continue to assist media practioners in discharging their duties diligently

Governor abiodun made the remark this Tuesday at the official inauguration of Olusegun Osoba Press centre at the Governor’s office, Oke-mosan, Abeokuta.

Describing Chief Osoba as a nationalist and an achiever, the Governor pointed out that history would vindicate him for using journalism to improve on the nation rather than divide it

He informed that his exemplary contributions to the pen profession had helped him to attain greater heights in politics, advising young media practitioners to emulate the professionalism demonstrated by Chief Osoba.

Earlier, the former Governor of Ogun State, Chief oluysegun osobya lauded Governor daypo abiyodun for the honour done on him, stating that the singular action has impacted positively to him as it would elongate his life span.

He applauded the governor for the improved infrastructural amenities in the state, especially the completion of the kuto road, the ongoing reconstruction of Abeokuta -sagamu road among others