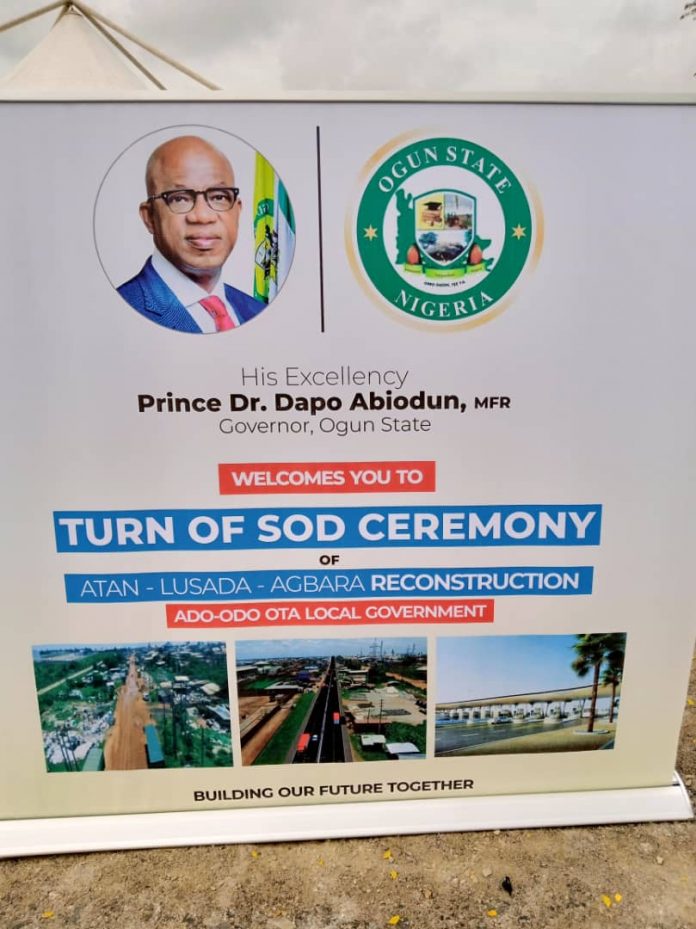 The Ogun State Governor Prince Dapo Abiodun says the reconstruction of Atan- Lusada-Agbara road will be completed in the next fifteen months.

The Governor therefore urged members of the community to take charge of the road before its completion.

Governor Abiodun made the remark this Thursday during the flag off of the 19.2 kilometre Atan-lusada-agbara road in Ogun West Senatorial District.

The governor explained that the reconstruction was in fulfilment of his promise during the electioneering campaign, assuring the residents of more developmental projects.

Governor Abiodun who described the road as an international route that link the nation to Benin Republic and also home to the highest number of industries in the country said at completion, it would enhance commercial activities of the corridor as part of the vision of the current administration in creating enabling environment to attract investors into the state.

The Governor who assured that government is committed to the provision of infrastructure and security in the state noted that despite the outbreak of the global pandemic, government has constructed 172 kilometres of roads and also reconstructed 120 roads across the state.

He however gave the assurance that his administration would not develop one part of the state at the expense of the other.

He called on the private investors to partner the government in transforming the state.

The event Was heralded with the commissioning of Igbesa-Lusada road.

Meanwhile, the federal government has assured the Gateway state of necessary support for its infrastructural development.

The Minister of Industry, Trade and Investment, Otunba Richard Adeniyi Adebayo gave the words of assurance at the turning of the Sod Ceremony for the reconstruction of Atan-Lusada-Agbara road.

The Minister who commended Governor Abiodun for his commitment towards developing the state, said the government at the centre is ready to collaborate with the state in its industrialisation drives.

Pointing out that industrialisation will aid employment generation, Otunba Adebayo noted that Trade and Investment are essential for the socio-economic development of the state and the nation as a whole.