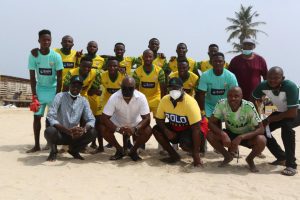 The Elegushi Beach in Nigeria’s commercial city, Lagos was on Saturday set agog when Member of world football governing body, FIFA’s Council, Executive Committee Member of CAF and President of the Nigeria Football Federation, Mr Amaju Melvin Pinnick officially kicked off the new Nigeria Beach Soccer League. The League, which is the baby project of the Amaju Pinnick-led Board is also supported by Beach Soccer Worldwide, and Africa Beach Soccer Union.

Speaking on the sidelines after the inauguration, Mr Pinnick, who was in company with NFF 1st Vice President, Barr Seyi Akinwunmi, Nigeria Beach Soccer League Coordinator, Mahmoud Hadejia and other officials, said he was excited to be part of the historical moment, and that he was at the event despite his busy schedule, to reiterate the NFF’s endorsement, whilst also pledging his total support for the newly formed Nigeria Beach Soccer Association.

“I’m not going talk much today because I’m very excited that we are finally kicking off the Beach Soccer League in Nigeria. I’m here to officially endorse this project and to also physically express the Federation’s full backing. I want to appreciate everyone that made this happen because it has been a collective effort despite the many hurdles. It has been long overdue. By God’s grace, we will take beach soccer to greater heights of excellence,” said Pinnick.

In a thrilling first round Group A opener, Kebbi Beach Soccer Club beat Badagry United 4-2 to get their title contention underway.

Adams Taiwo set the ball rolling for them on the 8th minute when his low drive beat goalkeeper Zomoto Idowu of Badagry to give Kebbi the lead. Badagry came close to grabbing their equalizer in the closing stages of the first period through Achior Valentine but his effort went wide to end the first period 1-0 in favour of Kebbi BSC.

The Bashar Aliyu-tutored boys began the second period like they did the first, as a free-kick in the 5th minute by Badmus Faud gave them a comfortable two-goal lead. Down but not out, Badagry kept asking all the questions and were duly rewarded in the 8th minute through Akewusola Jamal. B Kebbi responded almost immediately when S. Ilimi Abubakar restored their two-goal cushion just on the stroke of the second period for 3-1.

Badagry started the 3rd period on the front foot and came close to getting their reward again through Atemo Samuel but his shot was blocked by goalkeeper Arome Isah who had a terrific day between the sticks.

The ever-vibrant Isah could however do nothing to stop Achior Valentine’s free-kick in the 10th minute as Badagry pulled one back for 3-2.

Kebbi then made sure that any hope of a comeback was off the table for Badagry as they responded almost immediately via Adams Taiwo, who bagged his brace on opening day to lead the race for the Golden Boot.

In other matches played in Group B on Sunday, Igbogbo BSC of Lagos pummeled Edo HCF 6-3, Anambra BSC were 5-3 better than Kwara BSC in Group A, and Kada BSC squeezed past Smart City of Lagos, 5-2.

Edo HCF vs Kada B