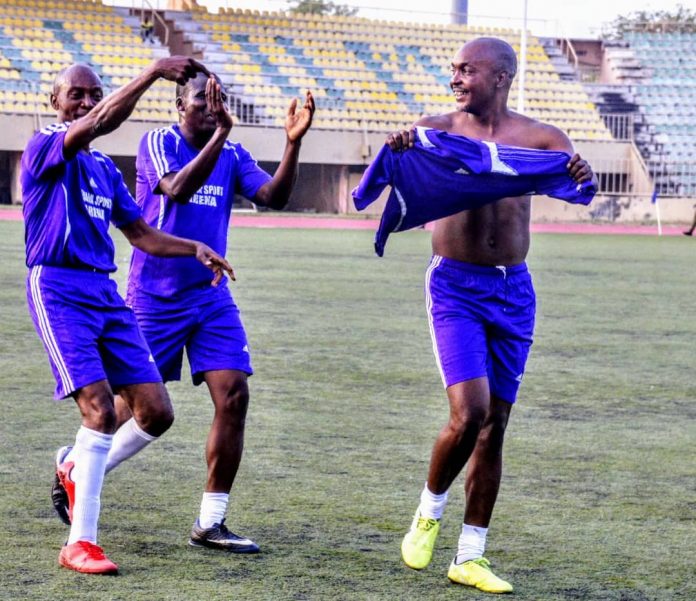 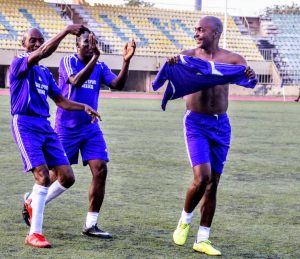 Team Abdulrahman Abdulrazaq drew 1-1 with KWARA SPORTS ARENA side at the Kwara State Stadium in Ilorin.

Team KWARA SPORTS ARENA were in control of the field in the first ten minutes of the match. The General Manager of Kwara United, Bashir Badawiy almost scored the first goal of the game after he dribbled the goal keeper but Alhaji Bako of Team Governor Abdulrazaq cleared the ball of the line.

In the second half, Team Abdulrazaq introduced Ambassador Seriki Yahaya who caused trouble for the defenders of Team KWARA SPORTS ARENA. The coach of KWARA SPORTS ARENA, Tunde Sani made a double change, introducing Wale Obalola and Dr Tokunbo Obajolowo.

Abdullahi Yusuf almost leveled up for Team KWARA SPORTS ARENA but he was denied by the woodwork.

Few seconds to the end of the match, Bello Lasora was fouled at the edge of the box and Abdullahi Biffo leveled up from the freekick making goalkeeper Fregene to struggle for the ball.

Speaking after the match, Ambassador Seriki Yahaya commended the organisers of the match for a job well done.

He revealed that the novelty match has made sports stakeholders in the state interact more with each other.

Ambassador Yahaya said, “I am happy with the novelty match. The caliber of sports stakeholders present here speaks a lot about the organiser; I give them a pass mark for organising such novelty match.

“Asides the football individuals, I can see other sports stakeholders uniting for a purpose and I hope the Local Organising Committee of KWARA SPORTS ARENA novelty match continue with such event”.

Meanwhile, the award night will be coming up on Tuesday, December 22, at the mandate Hall of Radio Kwara from 5pm.