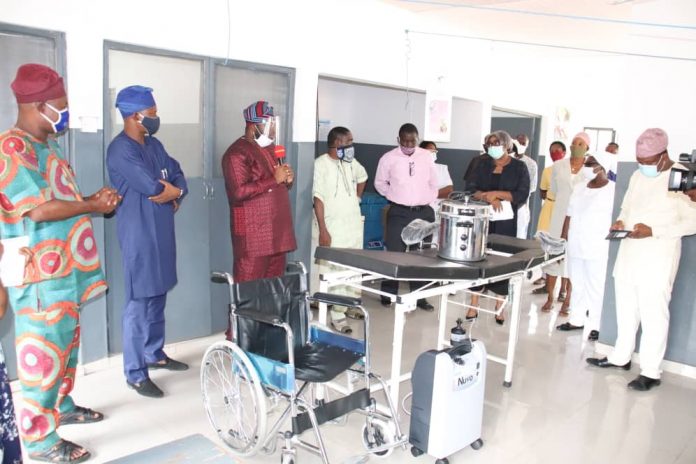 The current administration in Ogun state believes that an improved Health care delivery at the grassroots will reduce congestion of patients at secondary health facilities.

It has therefore continued to channel human and capital resources towards upgrading facilities at the Primary Health centres across the state .

Represented by the Senior Special Assistant to the Governor, Deputy Governor’s office, Mr Kola Salako, she maintained that Governor Dapo Abiodun is particular about the health status of the citizenry.

The Deputy Governor informed that it was in view of this that the administration had renovated all the Primary Health centres across the state, saying that the donation would further enhance qualitative healthcare delivery in Ado-Odo Otta Local government.

In a remark, the state Commissioner for Health, Dr Tomi Coker, represented by the Executive Secretary, Primary Health-Care board, Dr Elijah Ogunsola thanked the NGO for the donation assuring that the equipment would be put to good use and translate to improving the total wellbeing of mother and child at the centre.

Earlier, the Council Transition Committee chairman, Honourable Wasiu Lawal implored more public Spirited individuals and corporate bodies to take a cue from the Gardner lnitiative by giving back to the society.

Presenting the equipments to the Health Centre, the founder of the Gardner Social lmpact lnitiative, Ms Kemi Dallass said the gesture was borne out of the interest to assist the government in catering for pregnant women saying the donation included; Oxygen Concentrator machine, delivery- bed, sterilizer and wheel chair.