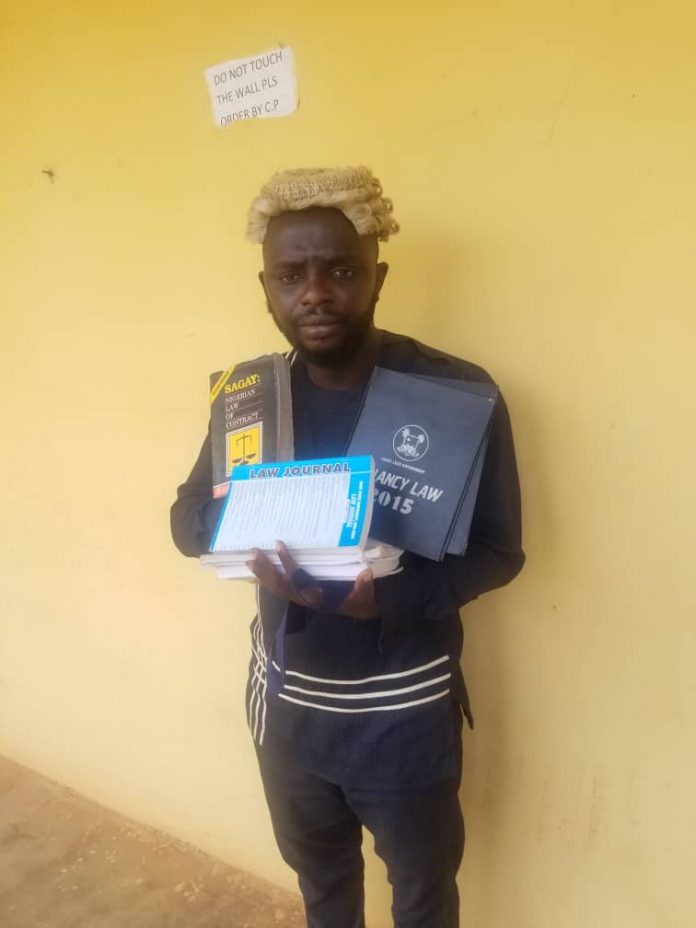 Men of Ogun State police Command on Sunday 28th of June, 2020 arrested one Elijah Ayodeji Ojo who has been parading  himself as a legal practitioner for quite some time now and has been using that to swindle several people of huge amounts of money.

The suspect was arrested following a petition written to the DPO Ajuwon police station by a legal practitioner who reported that the suspect who had been parading himself as a lawyer and thereby extorting money from unsuspecting members of the public has never been to law school anywhere and therefore not qualify to be addressed as a lawyer talkless of practicing the legal profession.

According to a release by the Command’s Spokesperson, DSP Abimbola Oyeyemi,upon  the petition, the DPO Ajuwon division, Sp Andrew Akinseye and his team of detectives embarked on a painstaking intelligence investigation about the self acclaimed lawyer.

The release informed that in the  process of their investigation, they came across a woman who was charged to court for an offence, but was duped by the suspect who collected about #300,000 from her to perfect her bail condition, but never show-up in the court.

The suspect was subsequently arrested after much evidence had been gathered against him, On interrogation, he confessed that though he gained admission to study law at Ekiti State University but did not finish the course neither does he attended  law school.

Meanwhile, the Commissioner of Police, Cp Kenneth Ebrimson according to Oyeyemi has ordered the immediate transfer of the suspect to the State Criminal investigation and intelligence department for further investigation and diligent prosecution.