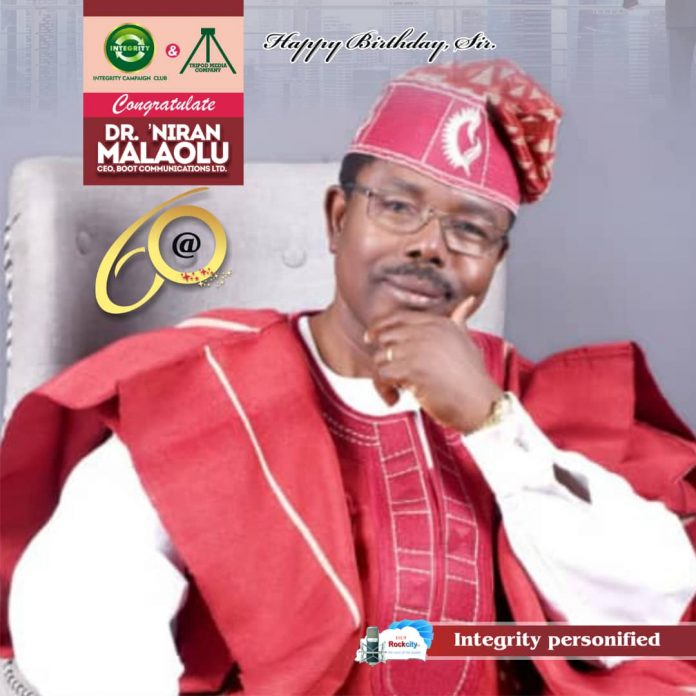 Governor Abiodun, in a statement by his Chief Press Secretary, Mr. Kunle Somorin  described the sexagenarian as a symbol of excellence in journalism and public service.

“Mr Malaolu is a great son of Ogun State and a brand ambassador of the excellence that the State is known for”, the statement said.

The Governor lauded Mr Malaolu’s commitment and service to the nation, saying he had “etched his name in gold in the history of the country as a purveyor of truth and conscience of the nation in the way he practices his brand of journalism.

“Mr Malaolu is a courageous journalist who stood among the best in the practice of ethical journalism. He spoke truth to power as an Editor and despite suffering unfairly in the hands of the military junta, emerged as a more resilient public officer when he served as commissioner in this state between 2003 and 2007.

The statement added that: “Malaolu left an indelible footprints in the sand of information management of that administration. He still kept faith with ethical journalism when he birthed Rockcity FM when he served out his tenure as commissioner.

“I am proud that the station has remained focussed, balanced and fair in its reportage of Government activities, and people-oriented in its programmes and policies.

“This is no doubt a reflection of Mr Malaolu’s professionalism, high moral integrity, business acumen and intellectual depth”, the statement added.

The Governor said he had no doubt that the Radio station will be even more successful in the years ahead.

Governor Abiodun prayed that as Malaolu clocks 60, God Almighty will grant him the grace of many more years in the service of humanity in good health and with renewed vigour to hold the banner of excellence longer.