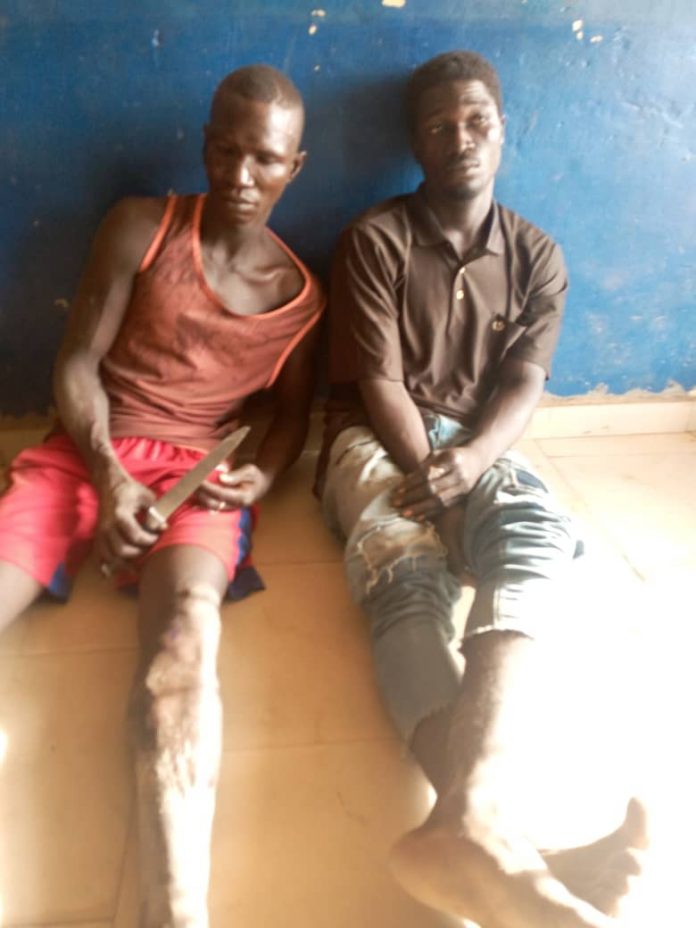 .
Two suspected armed robbers were on 26th of June 2020 arrested on the notorious long bridge along Lagos Ibadan express way while robbing motorists.

The suspects Ibrahim Nura ‘m’ 27 an indigine of Kebbi state and Isaac Kyegh ‘m’ an indigine of Benue both of who reside in Kara Isheri Ogun state were apprehended while attacking one Agoro Adebayo and Olalekan Toheeb whose vehicle had mechanical fault on the bridge..

While the victm was rectifying the fault, the two men suddenly came out from under the bridge and threatened the duo with knife and Cutlass so as to dispossess them of their valuables.

In the process, the patrol team from Warewa division led by the DPO SP Afeniforo Folake who are on routine patrol on the bridge met them in the process of carrying out the deadly act.

The  Police authoutities further informed that on sighting the policemen, the suspects took to their heels and jumped under the bridge, but they were hotly chased and apprehended right under the bridge where they have turned to their hideout.

Ajjackknife  is said to be one of the weapons recovered from them.

Meanwhile, the commissioner of police CP Kenneth Ebrimson has ordered the immediate transfer of the suspects to special anti robbery squads SARS for discreet investigation and prosecution.