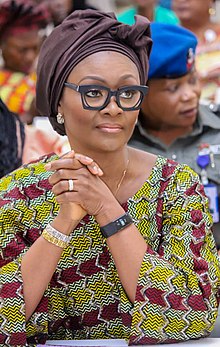 The wife of the Governor of Ogun state, Mrs. Bamidele Abiodun has acknowledged and commended the contributions and importance of the artisans in nation building and development.

She stressed the need for the society and government to encourage them and improve their working condition in order for them to be able to compete with their counterparts in the developed economies.
Mrs. Abiodun promised to champion their course by ensuring that the requests of the Association to further contribute to the economy of the state were considered by the present administration.
The Chairman of the Association, Mr. Anthony Olugbenga earlier in his address, listed some of the association’s requests to include training and retraining of members, the launch of artisans’ portal to provide needed professional data base that can handle services within the state and beyond among others.
He appreciated the First Lady’s contributions to the welfare of groups and individuals in the state, noting that she was the only First Lady to host and support the artisans association in the state.
Mr. Olugbenga pledged the association’s continued support for the present administration and the state in general.