President of the Nigeria Wrestling Federation (NWF) Hon. Daniel Igali is worried athletes would experience stringent scrutiny and difficulty in procuring travelling documents when competition returns after the outbreak of the Covid-19 pandemic. 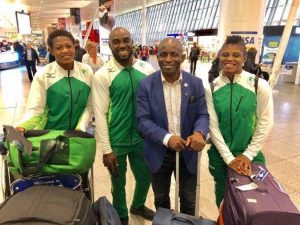 Virtually all sporting events globally have been grounded as a result of the ravaging pandemic since March, with wrestling likely to stage a comeback later this year.

However, with no cure or vaccine for Covid-19 in sight, the World and Olympic champion, who was in 2014 denied entry to Uzbekistan for the Bureau election of the United World Wrestling (UWW, then FILA), due to the outbreak of Ebola in Lagos and some parts of West Africa, fears that a similar scenario will play out when competition resumes, adding that the country could miss tournaments as a result.

“My biggest fear is not even with the actual wrestling,” the NWF boss said on Splash FM Ibadan at the weekend. “My biggest fears: You know we are Africans and most of the major tournaments are in America, in Europe and in Asia. And it is tough enough as it is with visas. I foresee a lot of reporting requirements that will hinder us from attending a lot of tournaments.

“I remember when there was Ebola in 2014, I wanted to compete for the UWW (United World Wrestling) Bureau, I wasn’t allowed to even go for the election because we had very minute cases of Ebola in Lagos and a few other parts of Africa.

“So, my fear is, once this Covid-19 thing comes, a lot of embassies are going to come up with very stringent rules about reporting, about tests and all that kind of things that might be an impediment for us. That is my bigger fear.”

Regarding actual competition on the mat, the former Commissioner for Sports in Bayelsa State believes nothing much will change.

“In terms of the competition itself, I don’t think much will change.

“Obviously, the social distancing thing could be there for the next, maybe, one year and next, then things will subside and we’ll get back to normal.”