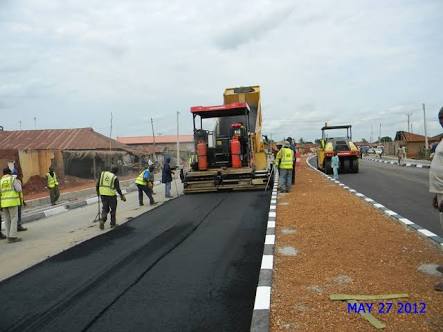 Construction is ongoing on the damage culvert, of the Opako Adigbe road, in Abeokuta.

The culvert which cut-off on Friday evening to pave way for the construction of a new one, will take about a month to be completed.

The site Engineer, Micheal Olaniyan said this in an interview with OGBC correspondent, Nurat Yusuf this Saturday.

Engineer Olaniyan who informed that the personnel will work round the clock to ensure timely completion of the project, stated that works will be carried out on weekends.

While the old culvert has been brought down, excavation has commenced to ensure the construction of quality project in line with Prince Dapo Abiodun’s determination to ensure good road network in the state.

Meanwhile, some residents of the area who spoke with OGBC this Saturday expressed joy over the construction of a new culvert.

Some of them including Messrs, John Ogar, Tobi Adewale and Mrs Yinka Aderogba, pointed out that the culvert when completed will reduced the stress they are passing through now as well as improve the economic activities of the people just as they commended the government for the gesture.

In the meantime, drains around Iwe iroyin, Oke-ilewo are being cleared to pave the way for free flow of water.

The block drainage which has hitherto prevented free flow of water whenever it rains, thereby creating hardship for motorist and pedestrians is now being cleared.

Staff reporter Olumide Tejuoso who visited the area quoted Messrs Fatai Akanni and Samuel Adeogun who are traders in the area as saying that human and vehicular activities will now go on unhindered.

While lauding the authority for clearing the drainage Mrs Joy Uche charged the residents to desist from dropping refuse into the drains so as to prevent its blockage in the future.

According to the consultant on works to the Governor, Engineer Ade Adesanya who lead a team of Engineers on the road projects inspection to parts of Ogun Central and Ogun West Senatorial Districts of the State, the construction was in fulfillment of the government’s promise to strategically link Ogun State to Lagos State.

According to Engineer Adesanya, street light, walkways and standard drains will be part of the features on the road.

In his remarks, the Permanent Secretary Ministry of Works and Infrastructure, Engineer Kayode Ademolake said that the length of the road in Olose Tuntun will be 3.1 kilometer, while that of RayPower road and Ikola Navy road will be 2 kilometer.

Some of the residents of the took turn to appreciates the government for the project, as expressed optimism that the construction will go a long way in alleviating the untold hardship they have been expressing.

News Femi Fadeyi - February 21, 2020
0
Women have again been reminded of their role as the unifying factory in the society. They have been therefore been urged to continue to be...

News Femi Fadeyi - February 21, 2020
0
The Federal and Ogun State Governments have been told to interface to find palliative measures for the residents of Agbado/Oke Aro and Itoki areas...

News Femi Fadeyi - February 19, 2020
0
The public hearing for the South Western Security Network code-named Operation Amotekun is to hold on Monday at the Assembly Complex Oke Mosan at...