The Ogun State Governor, Prince Dapo Abiodun, has assured that work on the 13.4 km Epe-Ijebu-Ode road would start immediately after the raining season.

Prince Abiodun, who made this known while speaking at Itele in Ijebu East Local Government added that he remained committed to the promise made to the people of the State to be just, free and fair. 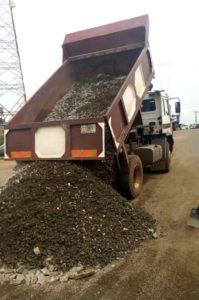 The Governor noted that his administration was considering rehabilitation of inter-state roads, which would attract investors as well as ease the movement of people and improve the economy of the State, disclosing that he and his Lagos State counterpart had written to President Buhari, to release the Lagos-Ota-Abeokuta and Ikorodu-Sagamu Roads to them, with the aim of commencing work on the roads.

The Governor commended President Muhammadu Buhari for mandating the Inspector General of Police to provide helicopter in the pursuit of kidnappers who kidnapped people along Lagos-Ibadan Expressway, adding that the move assisted the police and vigilance groups to apprehend the kidnappers and rescue the victims.