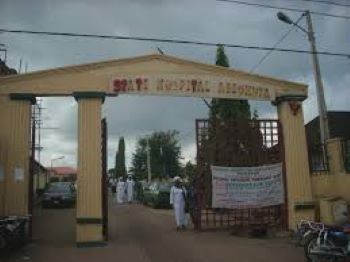 The Permanent Secretary, Ogun State Hospitals Management Board, Dr. Nafiu Aigoro has assured of the present administration’s determination to embark on complete overhaul of the health sector through provision of necessary facilities and adequate personnel.

Dr. Aigoro stated this, when the Management team of the Board visited the General Hospitals, Imeko and Ayetoro, as part of the on-going facility inspection tour of government hospitals across the State.

The Permanent Secretary said that the tour has enabled his team to access the state of facilities in the hospitals, noting that government was poised to facilitate an enduring intervention to resuscitate those identified.

He assured that government would not shy away from recognizing diligence and hard work with a view to rewarding officers who are outstanding in the performance of their duties.

”The monitoring tour is not for witch hunting, but to ascertain areas of challenges, look for solutions and to also encourage dedication, resourcefulness and efficiency among the staff”, Dr. Aigoro said.

He urged the staff to block all forms of leakages in revenue generation, make effective use of available medical equipment to avoid depreciation, promising to facilitate the supply of more equipment, so that residents could adopt the government-owned hospital as the first place of call whenever they require medical attention.

Earlier, in his remark, the Chief Medical Officer of the General Hospital, Imeko, Dr. Akeeb Oladunni, informed the team of some of the challenges, which include; dilapidated ante-natal clinic, inadequate basic laboratory equipment and security personnel.

Also, the Chief Nursing Officer, General Hospital, Ayetoro, Mrs. Esther Olabisi, appreciated the team for taking time out to visit them, saying it would spur them to be more committed to their duties.