The call for the people to embrace peace and unity as an antidote to the current challenges facing the country has been made.

Vice President Yemi Osinbajo made the call at the official unveiling of a book titled “ADVENTURE” in journalism and politics written by Aremo Olusegun Osoba. 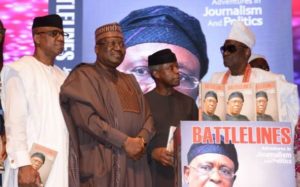 Appealing to Nigerians to join hands with the government in achieving peace and unity in the country, Professor Osinbajo noted that the Nations challenges was as a report of admixture of religion with politics that has caused hatred and backwardness among Nigerians.

He said the enemies of the nation capitalized on the ethnicity and diversity that ought to have bonded the nations as an entity in causing division and confusion.

Vice President Osinbajo described Aremo Osoba as a blessing  to the nation for being a true nationalist that always put the interest of the nation first.